Goodwood To Be Dressed in Style for the Revival - As Ever! 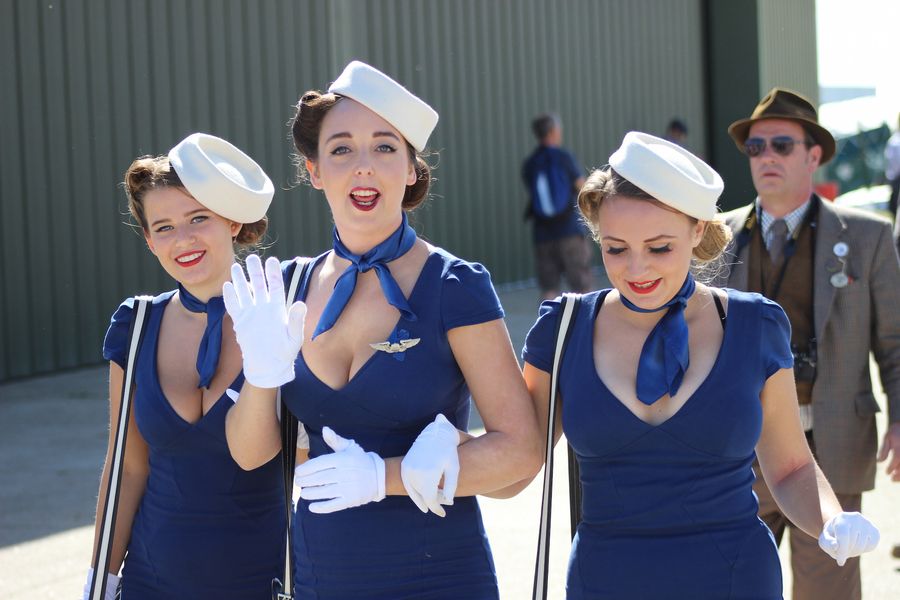 The Goodwood Revival is an occasion in which almost every single member of the crowd plays their part in creating a unique tribute to the era from the 1940s to the 1960s. Picking an outfit and completing an accurate period recreation for this year’s event on 13th-15th September will be as much a part of the experience for most visitors as the thrilling on-track action.

From roller-skating waitresses to village bobbies and World War 2 re-enactors, the Revival’s public areas are filled with a jaw-dropping array of outfits crafted with care and a real zest for the subject. That care and attention is mirrored in the strenuous efforts made by a small team dedicated to creating the time-travelling Goodwood Revival experience.

At Goodwood, creating the backdrop for which the Revival is so renowned is no small job. Peter Russell has been part of the team behind the Revival since it was first held, back in 1998. His is the role of ensuring that the various public areas around the Goodwood Motor Circuit are brim-full of appropriate automobilia.

“I’m a lost cause who has been collecting stuff for 50 years,” he said. “It’s a hobby that has got out of hand!

“When His Grace put together the first Revival I was here as a volunteer, and then after a few years the number of items that we borrowed to dress the Motor Circuit became fewer in number. I offered some pieces from my collection and now there are as many as 30 separate areas to dress around the Motor Circuit – the pits, the bars and other places such as the tobacconist’s and taxi rank.”

A major project for 2019 has been increasing the level of set-dressing to be found at the Goodwood Hotel.

“The hotel is getting some more attention this year, because a lot of people stay there and even more like to go for a drink and a meal during the event,” Peter Russell said.
“There will be a period bus taking people between the Motor Circuit and the Hotel, and we have sourced authentic bus stop signs that will complete the effect for passengers at each end of the journey.”

While Peter Russell looks after the set dressing for the Revival weekend, Sue O’Donoghue is responsible for ensuring that everyone employed to be at Goodwood – event staff, theatrical performers and serving staff – are all perfectly presented within the period.

“We’re a tiny team so it really is a year-round process to stay on top of the requirements, which can change dramatically from one Revival to the next,” she said.

“This year, for example, we have announced that there will be the 1960s area as people walk into the Goodwood Motor Circuit. That means recreating the really sharp, clean look of the period for many of the staff who will be interacting with the public throughout the weekend.”

While the Sixties will be conjured (complete with the Abbey Road studios and recreation Carnaby Street), for many visitors it is the 1940s and 1950s that offer a chance to experience an era of unprecedented glamour, and the age when youth found its voice.

“There is an enormous variety of styles – probably more so than at any time in history,” Sue O’Donoghue confirmed. “Also, we have so many more references in photos and film, and in our memories and grandparents’ wardrobes, so it pays to be exact.

“We will dress 250 actors, about 250 members of staff, 280 waiters, waitresses, butlers and check in staff for the themed Ball, as well as many members of His Grace’s family. Most of the costumes come from the collection of the Goodwood Actors’ Guild Wardrobe Department, but we also design and make large numbers of costumes every year.”

Its always important to remember that at the Revival, the only real requirement remains a jacket and tie for the gentlemen and a dress or suit for the ladies if they wish to enter the paddock.

However, there are numerous helpful ways on hand to complete a more detailed look while on site. Plenty of stalls are pitched Over the Road that offer period accessories and complete outfits. Meanwhile, within the Motor Circuit and at The Kennels, the ever-popular Betty’s Salon offers visitors to the Revival a chance to be styled with vintage hair and make-up from iconic 1940s victory rolls through soft 1950s movie star waves to a striking 1960's beehive (and gentlemen can relax in the Goodwood Barber).

Here are a few pointers from the experts when it comes to refining the Revival look:

Sergeant Pepper is Underage
The Swinging Sixties are a theme for the off-track entertainment at Gate 2, with The Beatles being celebrated through the presence of tailor-made Minis once owned by Paul, George and Ringo – together with another Mini formerly owned by Cilla Black – set in Carnaby Street with the Abbey Road studios nearby.

In the era of the Revival, however, outfits for the Fab Four should be inspired by their sharp-suited days of 1962-64 or their suede-jacketed beatnik personas of the 1965-66 era. Sergeant Pepper and the Summer of Love all happened after Goodwood closed its gates to racing.

Surprisingly Sixties
The Beatles aside, the 1960s brought iconic performers and images to every aspect of life from actors such as Julie Christie or James Robertson Justice, musicians from the Beach Boys to Johnny Cash - even secret agents like James Bond, Harry Palmer or Napoleon Solo. Let your inspiration run wild!

Check your Wings
Expert advice on paying tribute to the brave pilots of the era in 1940-45 (when Goodwood was known as RAF Westhampnett), is firstly to check the wings on your outfit. World War 2 RAF uniforms had the larger king’s crown on the eagle wing brevet and buttons, as we were in the reign of King George VI. Of course, Goodwood also has its char ladies and Land Girls, American GIs and bomber crews who each play their part in capturing an heroic chapter in history.

Austerity? Hardly!
Between the pillars of World War 2 and the Swinging Sixties lies a cornucopia of style in which to immerse oneself. The 1950s are often viewed as rather a grey period of austerity but this could scarcely be further from the truth. Bold stripes, polka dots and gingham, teddy boys and rockabilly mean that when a signature style you may never, in the words of our Prime Minister at the time, ‘have it so good’.

First glance Friday – visitors get their first chance to see all the cars, bikes and aircraft on show, as well as the thematic celebrations taking place across the Motor Circuit. The day starts with a display from the Supermarine Spitfire and ends with the £200 million grid of cars competing at dusk for the Kinrara Trophy.

Sensational Saturday – with more qualifying and six races, much-loved off-track festivities Over the Road and shopping on the High Street, Saturday offers something for everyone.

Super Sunday – another eight races fill the bill, making Sunday the most desirable for motorsport enthusiasts. As well as individual races, the overall winners are crowned in the deciding parts of both the St Mary's Trophy saloon car race and the Barry Sheene Memorial Trophy for motorcycles.

Three-day tickets and tickets for Saturday 14 September only have now sold out. A limited number of tickets remain available for Friday 13 and Sunday 15 September.