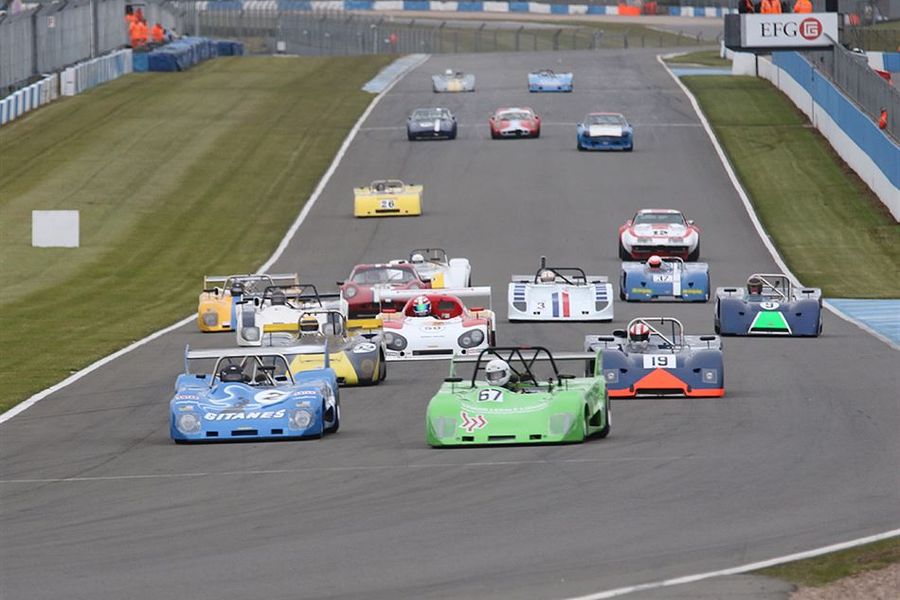 In spite of the British weather throwing almost everything it had at it, the Donington Historic Festival presented three days of hugely exciting historic motor racing over the Bank Holiday weekend (April 30th-May 2nd).
Classic motorsport fans were treated to a vast range of competition cars from the 1920s up to the 1990s, campaigning in a challenging range of climatic conditions ranging from torrential rain and hail to high winds and even a scattering of snow! Happily these were not constant throughout the weekend, and there was plenty of sunshine to show Donington off in all its park-like beauty; and the frequently wet track made for some very interesting racing indeed.
The rare and valuable historic competition machines were in safe hands, however, with drivers such as Le Mans winner Jackie Oliver and Touring Car giants John Cleland, Tim Harvey and Steve Soper representing earlier generations of racers, and present-day BTCC stars Andrew Jordan, Matt Neal and Colin Turkington showing that today’s drivers are just as comfortable behind the wheel of a decades-old race car as they are battling it out in the latest works offering. Andrew Jordan and his father Mike took the chequered flag in the final contest of the meeting, steering their Austin A40 – rebadged Austin GT40 for DHF – to victory in the HRDC Touring Greats race.
Other well-known faces spotted around the paddock included musician Chris Rea, who turned in an arresting performance in his Morris Minor ‘Police’ car, and motorsport pundit Tony Jardine, who took to the track in an E-type in the Jaguar Classic Challenge. And a familiar face to fans of 70s and 80s motor racing – Tony Dron – was on hand to present the trophies for the inaugural round of Motor Racing Legends’ Tony Dron Trophy, incorporated within MRL’s packed Historic Touring Car Challenge grid.
The Festival saw a mass presence of pre-War sports cars in the ‘Mad Jack’ race, and the DHF debut of the Pre-80 Endurance series, which pitched Lola T292 and T282 against Chevron B19 and March 75S in a fantastic battle.   And it was also Lola vs. Chevron (though this time T70s and B8s) in the mammoth, three-hour HMRN ‘1000km’ race into dusk on the Saturday evening.
Paddock visitors had an immense amount of metal to feast their eyes on, ranging from ERA R5D ‘Remus’, one of the iconic early Grand Prix cars taking part in the HGPCA’s Nuvolari trophy, to Rickard Rydell’s Volvo S40 from his 1998 BTCC Championship-winning season, which returned to racing for the first time in 18 years for the HSCC Super Touring Car Trophy.
Other Festival highlights included lively demonstrations of historic Formula 1 cars and Group B rally cars, the car club displays in the infield, and dozens of competition cars taking to the streets of Castle Donington village for the now-traditional village parade.  The RAF Battle of Britain Memorial Flight joined in the fun, sending – most appropriately, given the weather – a Hurricane to entertain the crowds.
The dates of DHF 2017 will be announced later this year.
Donington Historic Festival