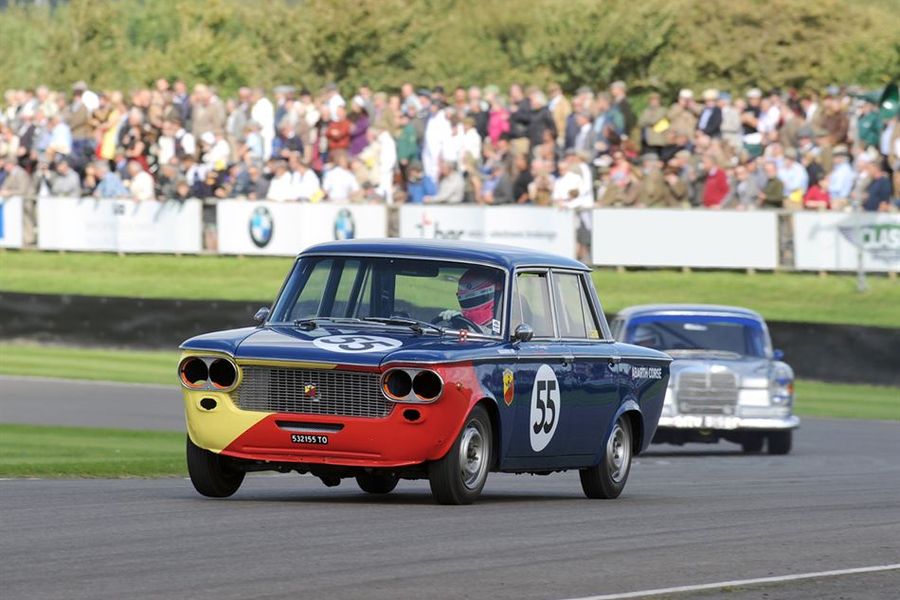 Renowned auctioneers Coys have confirmed the 20-prized lots coming under the hammer at this week’s eagerly-anticipated Historic Motorsport International (23rd-26th February at London ExCeL). Reflecting HMI’s position alongside the popular London Classic Car Show, the auction includes a number of notable classics for the open road as well as some ready-to-race competition cars.
With The London Classic Car Show putting the spotlight on Ferrari – and former Ferrari F1 and sportscar driver Jacky Ickx opening the new HMI show at noon on Thursday – it is fitting that a scarlet Ferrari tops the Coys bill. Dating back to 1968, the Pininfarina penned 330 GTC is one of Ferrari’s finest GT road cars – the example coming under the hammer has just 28,287 miles on the clock and is expected to sell for more than £500,000.
Other stand-out street machines include a rare right-hand-drive Mercedes-Benz 190SL from 1959 (estimate £120,00 to £150,000), a low mileage 1995 Porsche 993 Turbo (estimate £95,000 to £115,000), a 1966 Jaguar E-type Series 1 (estimate £90,000 to £120,000) and a 2007 Aston Martin DB9 with just delivery mileage on the clock (estimate £50,000 to £70,000).
Projected prices among the competition cars being auctioned will not require quite such deep pockets. An original 1965 Lotus Elan S1 roadster with an FIA Technical Passport, plus some notable racing history, is expected to sell for around £70,000 while a TVR Grantura Mk III of a similar vintage is likely to be a slightly more affordable way to go racing in 2017.
Those hoping to compete at Goodwood will be interested in the 1962 Fiat Abarth 1500S Evocation – a regular racer at the Sussex venue – which could sell for as little as £15,000.
The assorted Coys grid also features a number of V8 muscle cars including a pair of Chevrolet Holden ‘Supercars’ (estimate £25,000 to £29,000) and a 573bhp Ford Mustang GT (estimate £25,000 to £35,000) – a supercharged beast that has collected several class wins in circuit, sprint and hillclimb events.
“For this high-octane auction at Historic Motorsport International we have lined up a selection of sporting and competition cars ready to be raced in the upcoming season,” said Chris Routledge, CEO of Coys. “We’ve long had a deep association with historic motorsport since the earliest days of the Coys Historic Festival at Silverstone and to be a founding partner of Historic Motorsport International in our capital city is a very exciting opportunity.”
The full collection of all 20 Coys lots will be displayed on the show floor throughout the four days, adding yet another exciting dimension to the all-new show.
Viewing is open from noon on Thursday and all day Friday (23rd and 24th February) but access to the auction itself – which is due to start at 3pm on Saturday, 25th February – will be restricted to registered attendees who have purchased the official auction catalogue, either in advance or at Historic Motorsport International. Free access to the lots will be reinstated after the auction on Saturday and all day Sunday.
Although in only its first year, the levels of interest in HMI have greatly exceeded the organiser’s expectations. Stand space at the packed show has been taken by the major historic motorsport event and championship organisers in the UK and Europe, as well as by leading engineering and preparation companies and specialist competition car dealers, and teams.
Special displays will celebrate 50-years of both Formula Ford and the all-conquering Ford DFV F1 engine and there’s a thrilling showcase underlining the breadth of historic machinery that will be taking part in the Silverstone Classic festival in July.
Another major attraction will be the first Historic Motorsport Conference Programme. It will be hosted in the show’s Supagard Theatre by motorsport broadcaster Henry Hope-Frost and will include engaging interviews with many of the sport’s top names including legendary Le Mans winners Jürgen Barth, Derek Bell, Jacky Ickx, Jackie Oliver and Emanuele Pirro.
HMI will be officially opened by Ickx – the man who is regarded by many to be the world’s greatest all-round racing driver – at 12 noon on Thursday, 23rd February and runs alongside The London Classic Car Show, now in its third year and looking to build on the record 33,000 visitors who visited the 2016 event.
Auction Historic Motosport International Coys HMI