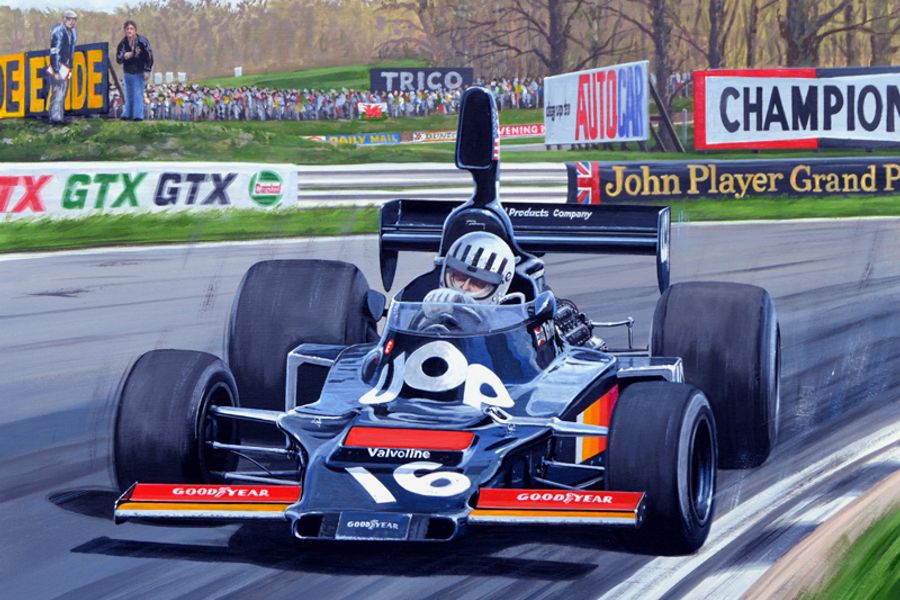 A £50,000 fund has been launched today (11th June) to create a permanent memorial to Welsh Formula 1 driver Tom Pryce in his hometown of Denbigh. Launched on what would have been Pryce’s 70th birthday, the money will be used to erect a statue as a lasting memorial to the rising star who died in a tragic accident in the 1977 South African Grand Prix.

The launch ties in with the build up to the Historic Sports Car Club’s race meeting at Anglesey (13th/14th July), which will celebrate the life of the local hero. To mark the event, an original Tom Pryce painting by renowned motor sport artist Andrew Kitson will be presented to the aggregate winner of the XL Aurora Trophy races at the event (pictured above).

A website, a Facebook page and a Go Fund Me page have been set up and donations can now be made via www.gofundme.com/tom-pryce-appeal. The fund organisers want to inspire future generations to follow their dreams as well as creating a permanent memorial and the strap line to the appeal is #whatsyourdream

Talented sculptor Nick Elphick is working on the project and is keen to make an ‘interactive piece of public art’ which people can use to take selfies. There is already a Tom Pryce mural celebrating his achievements in nearby Ruthin and a stretch of track at the Anglesey Circuit is named the Tom Pryce Straight in his honour.

Tom, or Maldwyn as he was known to his friends, was raised in the small village of Nantglyn just outside Denbigh and he was a pupil of the former Frongoch School in the town. He made a meteoric rise to fame as a racing driver and remains the only Welshman to have won a Formula 1 race.

Among those supporting the appeal is the Mayor of Denbigh, Cllr Gaynor Wood-Tickle. She said: “I think the appeal to create a special piece of public art to remember Tom is absolutely wonderful. No matter what young people want to do, they need things to inspire them and this can only be a good thing for the town of Denbigh.”

One of Tom’s friends, Dave Jones, from St Asaph, brought Tom’s beloved blue MGB GT car to the launch. He said: “I first met Tom when he was a tractor mechanic and I was a spotty 14 year-old. At that time, I knew he was going to a racing drivers’ school which impressed me immensely but as a person he was a lovely chap, very quiet but very funny too.

“He was a hero of mine and I was passionate about motor racing because of Tom, and I followed his career closely. His death was a terrible tragedy and a great loss. I was deeply honoured when his parents gave me Tom’s MGB GT for safe keeping.”

Among the main drivers of the appeal is leading businessman, Mario Kreft MBE, from Denbigh, who stressed that they were not looking for any public money for the statue, which would be funded by donations from supporters. “The strap line of the campaign, #whatsyourdream, is perfect because Tom went from being an apprentice tractor mechanic to a Formula 1 driver in a very short space of time. It’s a wonderful story and Tom has clearly not been forgotten but I think he’s probably not had the recognition he deserves. We hope that this fitting and exceptional piece of public art will inspire all of us but particularly our young people.”