Six Titles Shortlisted for RAC Motoring Book of the Year 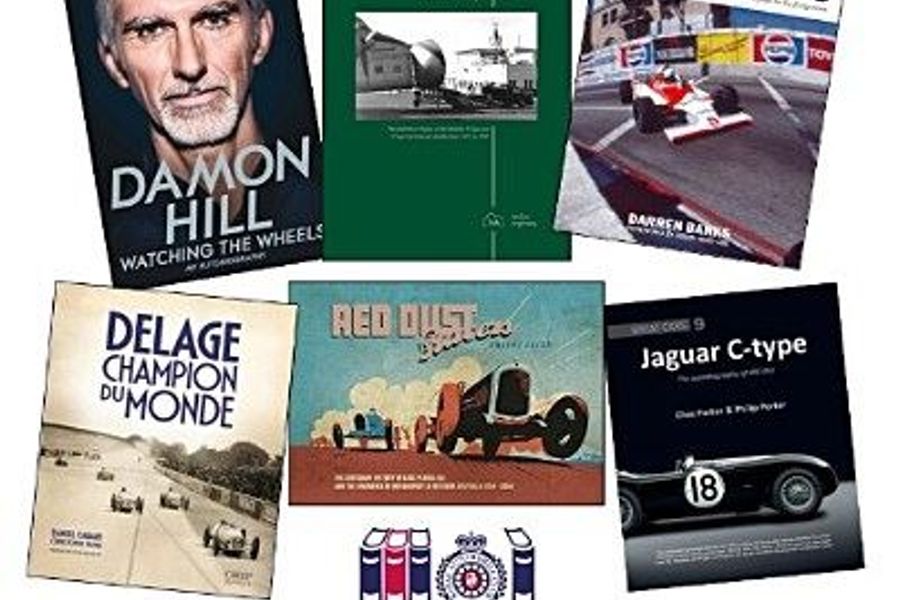 Six contenders for the 2017 Royal Automobile Club Motoring Book of the Year Award have been shortlisted by a special panel of independent judges. The winner, chosen from a rich mixture of new reference works, driver biographies and untold stories, will be announced on Wednesday 1st November at a ceremony to be held at the Club’s Pall Mall clubhouse.
“We never fail to be amazed at the quality and variety of titles our hugely experienced judges propose for the Award,” said Peter Read, the Club’s Motoring Committee Chairman. “This year the stand-out books were clear from the start but, as ever, the debate to choose a winner has been arduous.
“This Club loves books – we have one of the world’s finest motoring libraries, one we add to constantly – and we believe fervently in the written, and printed, word. We want our Award to be an incentive for authors to keep striving for excellence and originality.”
This year’s judging panel includes newcomers Tom Wiltshire, who reviews books for leading weekly magazine Auto Express, and Mark Dixon, the widely respected deputy editor of Octane magazine. They join Christian Whitehead from the motoring department of London bookstore Foyles, leading independent motoring bookseller Ben Horton of Hortons Books, Gordon Cruickshank from Motor Sport magazine, Classic & Sports Car magazine international editor Mick Walsh, and commentator and reviewer Henry Hope-Frost.
As judges who are totally independent of the Royal Automobile Club, they represent the UK’s most informed motoring literary critics.
The six titles now in the running for the Royal Automobile Club’s 2017 Motoring Book of the Year Award are:
• Red Dust Racers by Graeme Cocks, published by Motoring Past Vintage.
“Fantastic photos, memorabilia and anecdotes revive the memory of the Australian Outback racing institution that was Lake Perkolilli” – Mark Dixon.
• Jaguar C-type: The Autobiography of XKC 051 by Chas Parker and Philip Porter, published by Porter Press.
“Duncan Hamilton’s character and the family connection gave it a warmer feel – and the spat over Top Gear enlivened it too” – Gordon Cruickshank.
• Watching The Wheels: My Autobiography by Damon Hill, published by Pan Macmillan.
“Fabulously frank and cerebral account. One of the very finest sports biographies of its generation.” – Henry Hope-Frost.
• Stephen South: The Way It Was by Darren Banks, published by Performance Publishing.
“The publisher should be proud of their remarkable first attempt on a driver you haven't heard of, but soon will” – Christian Whitehead.
• Delage – Champion Du Monde by Daniel Cabart & Christophe Pund, published by Orep Editions.
“Perfectly timed for the 90th anniversary of the Gallic Grand Prix great, vividly covers development, competition, drivers, and individual chassis histories” – Mick Walsh.
• Continental Journeys: The Definitive History of the Bentley R-type and S-type Continental Models From 1952 to 1965 by David Bassoli, published by Nubes Argentea.
“Here is an investment book of the future – if you want a truly excellent example of specialist publishing then this is it” – Ben Horton.
One of these books will receive the coveted Royal Automobile Club 2017 Motoring Book of the Year Award on 1 November. In addition, one other book from the leading six will receive the judges’ accolade of ‘Specialist Book of The Year’ for an impressive feat of research and endeavour.
The evening isn’t all about giving out awards though. Racing legend, Howden Ganley, will be interviewed on stage and announce a fascinating new venture, while expert panellists will debate the pros and cons of book collecting.
“Our Award, and the evening that goes with it, has created a unique focus for motoring book publishing in this country,” added Peter Read. “We feel 2017 will be a vintage year for the event, and once again prove that the best books will ensure this area of publishing remains vibrant and relevant.”