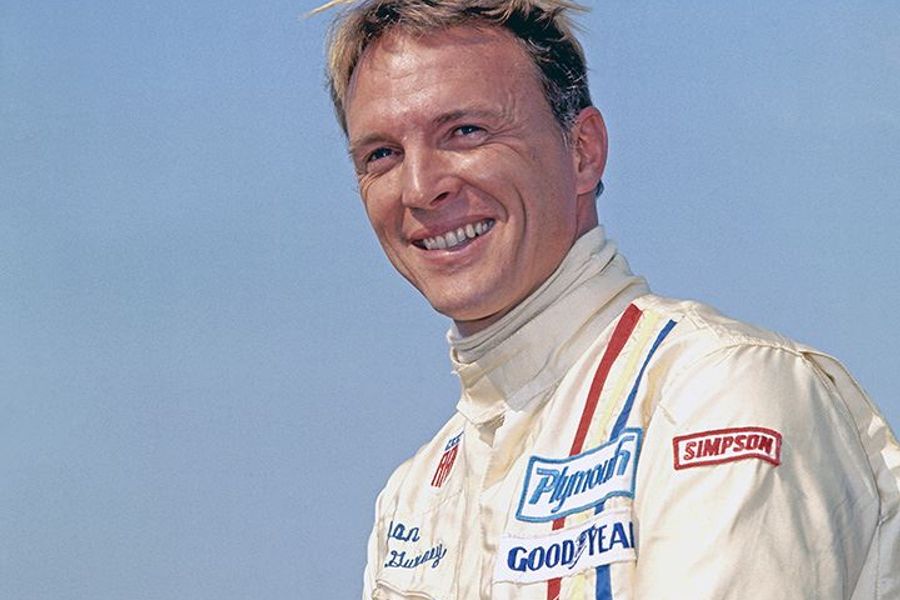 Dan Gurney was everything that is good about motor racing.  Tall, laconic and good looking are the easy bits but being an all-round nice guy is rare as well.
If you look back over his life you see Dan Gurney at the heart of so many things.  It is facile to break his life down into a list of achievements but he was in so many different world-changing moments but some of the milestones along the way need to recognised:
Whilst it is easy to think of Dan Gurney as being at the beginning of ‘slicks and wings’, his career predates that, making the span of his experience all the more amazing.  Having raced sportscars in the USA for, amongst others, Frank Aciero, he was championed by NART’s Luigi Chinetti who arranged a Ferrari ride at Le Mans in 1959.  This is the first place where we take stock… he raced a front-engined works Ferrari at Le Mans in 1959 as well as joining the Ferrari Grand Prix team with the outdated but splendid Dino 246.
After a few Grand Prix races for Ferrari he (some would say inevitably) clashed with the then-management, and for 1960 he joined the BRM team for Grands Prix.  At a time where teams had ‘number one’ and ‘number two’ drivers, Gurney played his part supporting team-leader Graham Hill to the World Championship, before joining the fledgling Porsche GP effort with their sportscar derived single seaters.
In the 60s, drivers needed to have a strong mechanical understanding, frequently having to nurse an ailing car to the finish line.  A new breed was emerging, which would see both Brabham and McLaren create their own cars, a route Gurney was to follow, but it was 1961 that saw DSG join Brabham, supporting ‘Black Jack’ for a season of Grands Prix.
His engineering credentials saw him join with AJ Foyt for an historic win in the 1967 Le Mans 24 Hour race, as part of Ford’s ongoing steamroller approach to the classic event.
Gurney really came into his own with the formation of his Eagle brand of race cars.  He ran as ‘All American Racers’ in the USA whilst a little judicious tinkering with the name saw Anglo American Racers on the Grand Prix circuits.  Either way AAR was a force to be reckoned with.  Whilst both the F1 and Indianapolis cars were built in Southern California, the Grand Prix cars were shipped to the UK for finishing and to have engines and ancillaries installed.  The engineer in Gurney wanted to have not only the best engine, but arguably the most complex, and the Weslake V12 was specified.  Installation and operational difficulties saw the Grand Prix Eagle debut with a Coventry Climax FPF 2.7 litre engine prior to the Weslake coming on stream.
At a time when most teams did not pay a lot of attention to how their cars looked, Dan Gurney blew everyone away with his standards of presentation.  The Eagles on both sides of ‘the pond’ having a distinct So-Cal look with lots of chrome and bright shiny paintwork.  Colin Chapman, in particular, sat up and took notice, his Lotus team in latter years echoing Gurney’s presentation skills.
Upon his retirement from Formula One, Gurney concentrated on All American Racers, building Indycars as well as designing and running the ultra successful Toyota IMSA sportscar tear.
He was also pivotal in the setting up of CART, the owner-led renegade race series, which saw teams much more in control of their race series.
It is easy to get lost in a list of achievements as a driver, owner and constructor, but the sheer spread of Daniel Sexton Gurneys influence and experience is what really gets to us.  Front engine Grand Prix cars, Ford Galaxie at Daytona, winning Le Mans in a Ford are almost side bars to this remarkable man’s life and each and every one of them could be life defining as it was.  Typically Dan Gurney would talk about any sector of his remarkable life, but only when pushed.  He would drop into a conversation about banked tracks with “that Galaxie was a real handful” and leave the rest of the story hanging mid-air for anyone to pick up if they chose to.
And people always wanted the rest of the story…
PT.