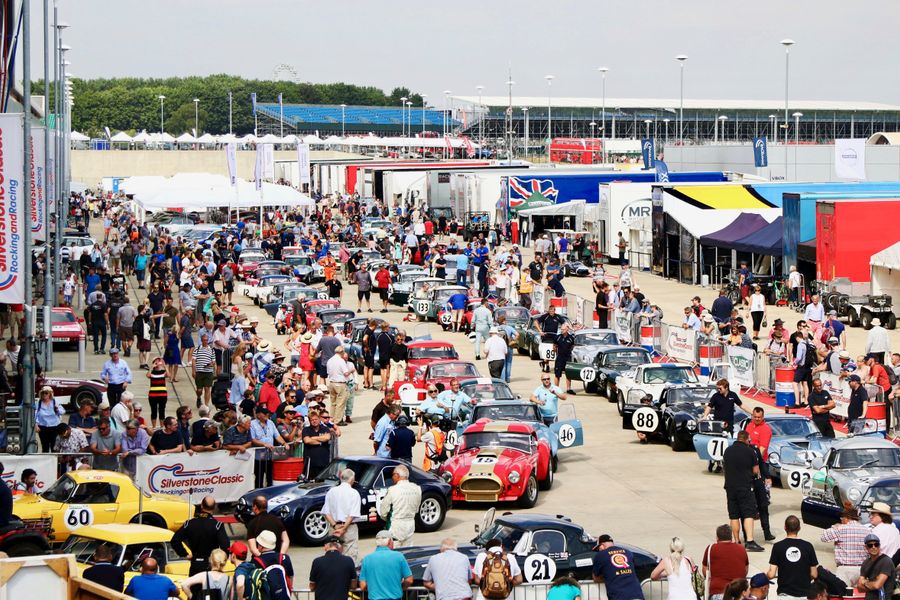 All tickets must be purchased in advance and the Early Bird offer – open to those buying before the end of March – presents significant savings of up to 17 per cent on standard prices. A wide range of tickets is available including adult, young adult, child, family, day, and weekend, as well as car club display packages for club members and hospitality options.

Those snapping up their tickets now can look ahead to what already promises to be the biggest and best Classic yet with a packed programme of evocative races, record numbers of car club displays and more off-track activities, amusements and attractions than ever before.

With just days to go, here are ten great countdown reasons to book Early Bird tickets before the offer ends at midnight on Sunday 31st March.

1. The sublime three-day Silverstone Classic is the world’s biggest classic motor racing festival recreating all the halcyon eras of motor sport. This year’s epic 21-race programme features the full spectrum of motor sport history including for the very first time showdowns for Formula One, Formula Two and Formula Three.

2. The action-packed 2019 racecard features special anniversary races to celebrate Bentley’s centenary, 60 years of the iconic Mini and 50 years of the Ford Capri, ‘the car you always promised yourself’. Not only that but there is also a special celebration package available to all Mini and Capri owners wanting to join the festivities offering a pair of adult tickets, dedicated display parking plus a memorable track parade.

3. Legendary brand Aston Martin will be out in force at the Classic. An exciting new three-year partnership with the locally-based, world famous luxury automotive group embraces a raft of rousing on- and off-track activities including the very first round of Aston Martin’s newly announced Aston Martin Heritage Racing Festival Series. The mouth-watering maiden grid is expected to be packed with stunning DB9s, Vantages and Vulcans.

4. Racing legend Sir Jackie Stewart will be among the fast and famous at this summer’s Classic. The two-time World Champion will be celebrating the 50thanniversary of his first F1 title in 1969 and his two unforgettable British Grand Prix wins which came at Silverstone in 1969 and 1971. Sir Jackie will also be raising awareness and funds for the Race Against Dementia Fellowship scheme that he founded, in collaboration with the event’s Official Charity Partner, Alzheimer’s Research UK.

5. An unprecedented number of 130+ car clubs have already registered for glittering in-field parking displays making this year’s Classic another record-breaker four months before the gates have even opened! In total, more than 10,000 privately-owned and cherished classics will be on show over the three days.

6. Offering exceptional value for money, all tickets give access to both racing paddocks, open trackside grandstands, the majority of the funfair rides, a host of great entertainment for all ages on the festival’s very own Village Green plus a multitude of eye-catching displays, stunt shows and interactive activities providing visitors with lots of flat-out fun for all the family all for FREE.

7. What’s more, the upbeat live music concerts on Friday and Saturday evenings are also included in the ticket price. This summer there’s a special homage to the seminal Woodstock festival with the music of original performers Creedence Clearwater Revival, Joe Cocker, Jimi Hendrix, Santana, Sly and the Family Stone, Ten Years After and The Who.

8. While the cars are always the stars at the Classic, the bustling infield is packed with attractions to captivate and amuse all ages and tastes. As a taster there are panoramic rides on a 40m big wheel, chuckles on a crazy golf course, dastardly dodgem dogfights, persuasive retail opportunities and even the chance for budding young footballers to perfect their soccer talents in the Yokohama Chelsea Skills Zone.

9. Much-loved TV personality and renowned motoring mastermind Mike Brewer returns with his hugely-popular Car Clinics. In the breaks between the racing, show-goers can join Mike as he casts his expert eye over a great line-up of stand-out classic cars.

10. Successfully introduced in 2018, Drive Live offers visitors a wonderful opportunity to take a test drive in some of the latest models from the showrooms of participating manufacturers including Aston Martin. For those with a preference for two-wheels, a similar Ride Live initiative will be launched in July. What’s more, with lots of great cars coming under the Silverstone Auctions hammer over the weekend, there’s even the chance to drive home in your dream classic at the end of the show!

Best of all: Early Bird tickets booked now save £s and £s. Full details of all Early Bird tickets – as well as weekend festival camping and upgrade options including VIP hospitality and the RetroRun experience (which this year incorporates a tour of the newly opened Jaguar Land Rover Classic Works) – can be found on the official event website.

Tickets Now on Sale for All Days of RAC Rally