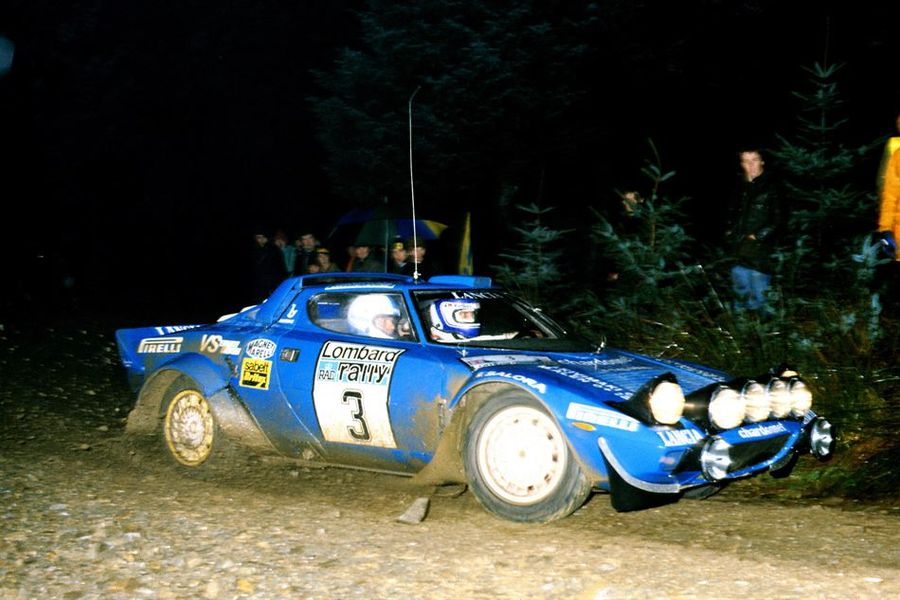 Everybody idolises the sensational Lancia Stratos, but no-one worships it more than ‘Rally God’ Markku Alén. The Finnish legend, a winner of 19 WRC rounds, is one of the lucky men to have raced the stunning Ferrari Dino V6-hearted icon in its glorious heyday.
Even he was kept waiting, though…
Back in the seventies, the Bertone-designed Stratos was a game-changer and very much the weapon of choice. As the world’s first purpose-built rally car, it clinched three consecutive Constructors’ titles between 1974 and 1976.
Lancia’s parent company Fiat, however, was not keen to see its star driver winning in what was a very limited-production special – after all, fewer than 500 Stratos’ were ever built.
As a result, although Alén had been Fiat’s factory driver from 1975, it wasn’t until late in the 1978 season that he finally got his hands on an amazing Stratos. By that time, the Finn had safely captured the coveted FIA Cup for Drivers – the precursor to the World Championship – competing in a far more mainstream and marketable Fiat 131 Abarth.
The long-overdue switch, though, brought immediate success. Indeed, Alén stunned everyone on his Stratos debut by winning the San Remo Rally – beating all the Italian heroes on their home ground. It was a stunning performance that ignited a lasting love affair with the mid-engined missile.
“It was an incredible car – for me, it was like a little boy stepping into Formula One,” he recalls. “I kept asking and asking to drive it, but all the time I was told, ‘131 for you’. When I finally got to drive one, I realised how easy it was, especially on Tarmac. Like night and day. My only problem was I was so tall; I hit my head all the time. And in the fog and rain you don’t see as well.”
Alén’s famous San Remo victory, though, came very late in the Stratos’ lifetime. By then, development had virtually stopped and the Italians were starting to plan for its successor, the equally awesome Group B-inspired Lancia 037 – a car in which Alén was also a WRC winner.
Much to the delight of UK rally fans ­– and notwithstanding the Stratos’ declining competitiveness ­– Markku did persuade his bosses to let him enter one into both the 1979 and 1981 RAC Rallies, a forest event he believed the ageing supercar could still win.
Alén did lead briefly in 1979, but was delayed by technical issues and had to settle for numerous stage wins and fifth place in the final classification. A crash ended his hopes in 1981, by which time Audi’s four-wheel-drive quattro had raised the bar to another level.
Almost 40-years on, the man famous for coining the term ‘Now, Maximum Attack’, is back in Britain. And back in one of his adored Stratos’.
As one of the five ‘Rally Gods’ headlining at GLasgow’s IGNITION, Alén will be revving up in one of the original competition cars – a stunning light blue example that has just been restored to its period livery.
“It will be a great weekend and I’m really looking forward to meeting the other Rally Gods and so many fellow enthusiasts,” anticipated Alén. “And to be back in a wonderful Stratos is always very special.”
All five of the Early August event’s Rally Gods – Alén plus Miki Biasion, Stig Blomqvist, Timo Salonen and Ari Vatanen – will be back behind the wheels of the legendary cars that they campaigned in their heydays. Alén in a Stratos, Biasion in a Lancia integrale and Vatanen in an Escort RS1800RS. The cars Blomqvist and Salonen will be driving will be announced shortly.
Twice a day – as the climax to each exhilarating Track Show – the Rally Gods will also be competing against-the-clock in a dramatic not-to-be-missed Street Stage Shoot-Outs – this time racing cutting-edge sportscars on a special gymkhana circuit.
Visitors will also be given the chance to see their Rally God heroes up close with regular autograph and selfie sessions on all three days of the spectacular event.
Building on the huge success of last year’s inaugural IGNITION which attracted more than 26,000 visitors, other notable features for 2017 include: 70 years of Ferrari – a tribute to the history and legacy of the famous Prancing Horse; the 60th anniversary of Ecurie Ecosse’s famous 24 Hours of Le Mans victory with an exclusive line-up of the team’s finest machinery; a bike stunt zone; a supercar grid to rival any featuring Lamborghinis, Porsches, McLarens, Mustangs, Mercedes’ and more; plus, hundreds of exhibitors showcasing the latest releases with the opportunity for visitors to buy their next car or bike at the event.