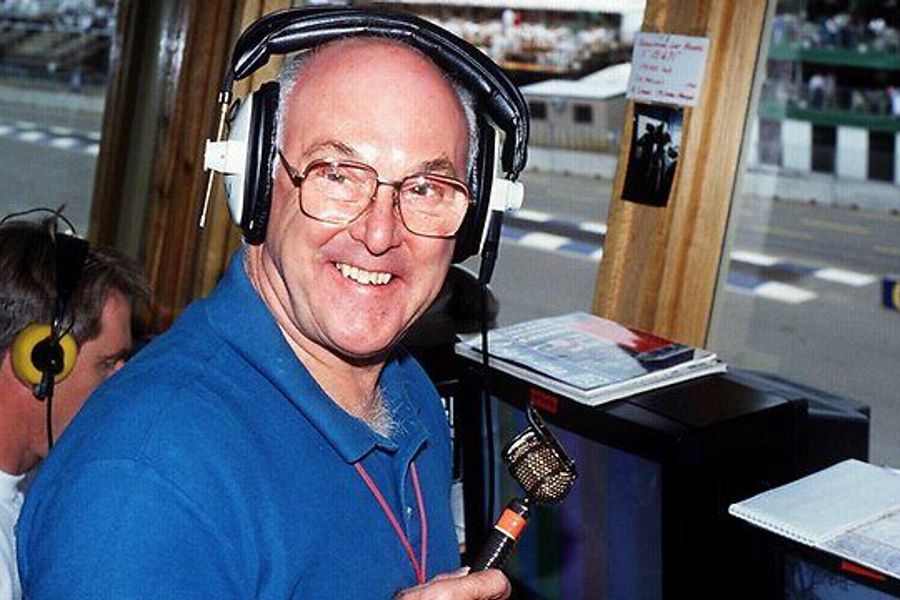 One of the most popular items posted on out Facebook page this week was when we gave a well-deserved birthday tribute to Murray Walker, for many years the voice of Formula One – and other forms of motorsport – not only in the UK but elsewhere in the world where they picked up the BBC’s feed. He is one of the rare people that you never hear a bad word about, and his sheer enthusiasm opened the door to motorsport for a lot of viewers.
Reading the comments on our FaceBook post reminded one of our team of a couple of their encounters with the great man, one of which showed the professionalism Murray brought to his work, while the other gave a brief claim to fame.
“I was at Thruxton for the visit of the British Touring Car Championship in May 1995 (I think I was covering the support races for either Autosport or Motoring News), and was out at the press box for the start of one of the Touring Car races. At that time the press  box, on the inside of the circuit at the exit to the chicane at the end of the lap, was a Portakabin on stilts with a viewing platform next to it that gave a great view of the cars going through Church and up Woodham Hill and into the chicane.
“I was stood by Murray on the viewing platform and there had been a discussion about how he put the commentary over the edited race footage mid-week ready for the following weekend’s BBC Grandstand sports programme. The race started and on lap one the pack come up the hill and there was a sudden roar from the crowd in the stands opposite as the Ford Mondeo of Charlie Cox launched off of the circuit and into a monumental series of rolls before ending up over the boundary fence of the circuit.
“Like all truly big accidents there was a moment of silence before anyone said anything, and much relief when we received word that Charlie was pretty shaken up and concussed but not seriously injured. We chatted with Murray about what we had seen and how strong cars were etc., and after a long delay racing restarted.
“The next weekend I sat down to watch the BTCC on Grandstand and to see the incident from a different angle, and remember to this day Murray’s voice over:  ‘Look at that! Look at that! Who is that? I think it was a Mondeo…Somebody has gone off in a very big way!’
“All this from a man who saw the incident live, knew who the driver was, but was aware that the vast majority of viewers had not seen it, did not know who was in the car so he reacted to the situation as if live and fed them information at the speed it was happening on screen in front of them – class act.
“A few years earlier I had met Murray at the door to same the Thruxton press box, which at the time were a pretty rickety set of wooden steps, and without making a fuss about it ‘helped’ him up as we all knew he had recently had a hip operation. We had a chat and then got on with the day’s racing.
“A few days later I was at Williams GP for their Formula One launch [I remember the drivers as being Thierry Boutson and Ricardo Patrese, which suggests 1989 as the publication I was working for didn't last much longer than that].
“Before the launch the assembled media were all waiting in a large room, and every time the door opened we all looked to see if this was when we would be allowed into the area being prepared for the event. Late on, the door opens, and there is stood Murray Walker, suddenly being faced by over a hundred-people looking right at him.
“Obviously scanning for anyone he knows, he looked right at me, must have thought ‘I know him from somewhere’ and said very cheerily ‘hi, how are you’ and waved to me before being whisked away by someone in Williams team kit.
“When we all sat down for the launch a very nice young lady from the local paper sat next to me, and when chatting said she knew nothing about motorsport but their sports reporter was off ill so she had been sent along. I explained things as the presentation went on and gave a bit of a context and she scribbled away happily.
“As everyone prepared to leave she thanked me and said ‘I thought you had to be someone important because Murray Walker said hello, but you’re not, are you?’ Some days life lifts you up and knocks you down again…”