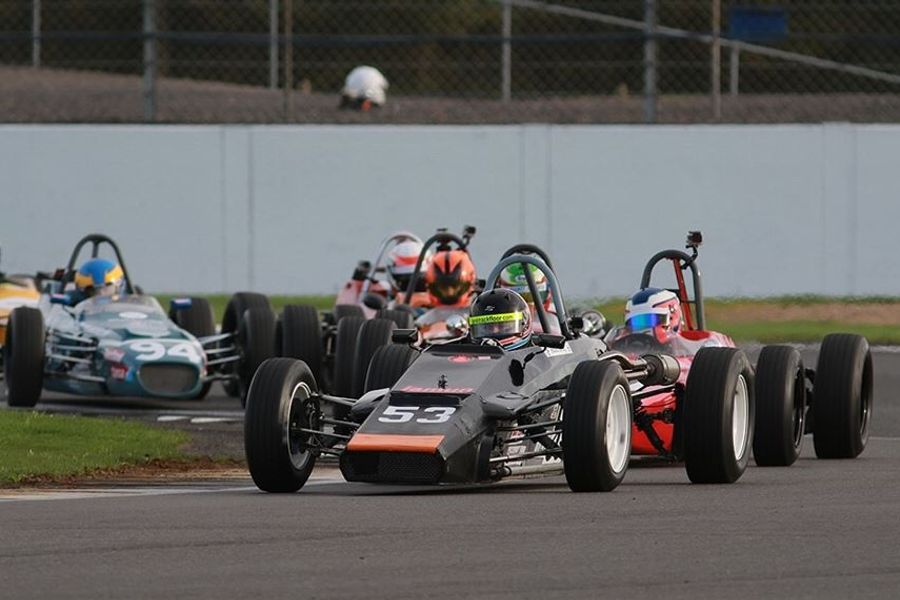 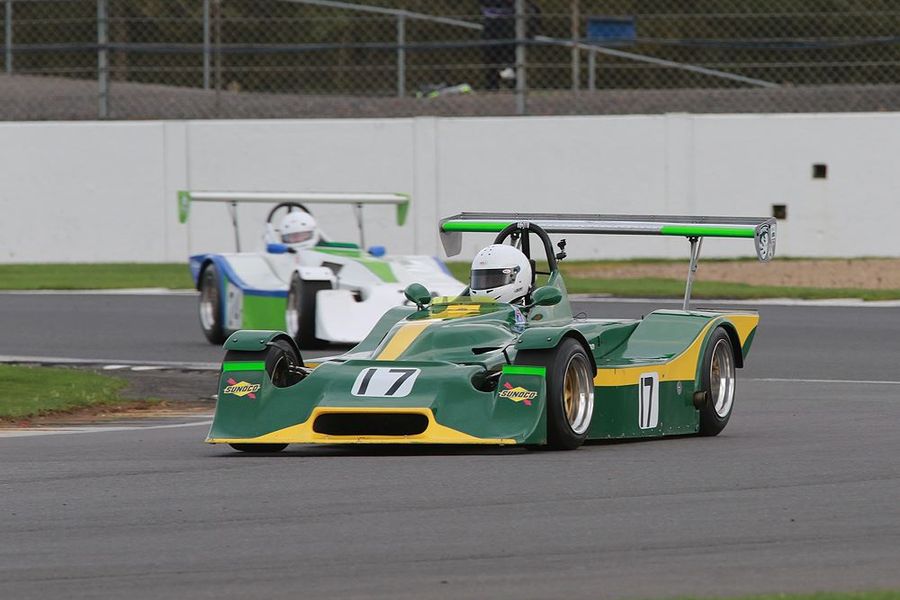 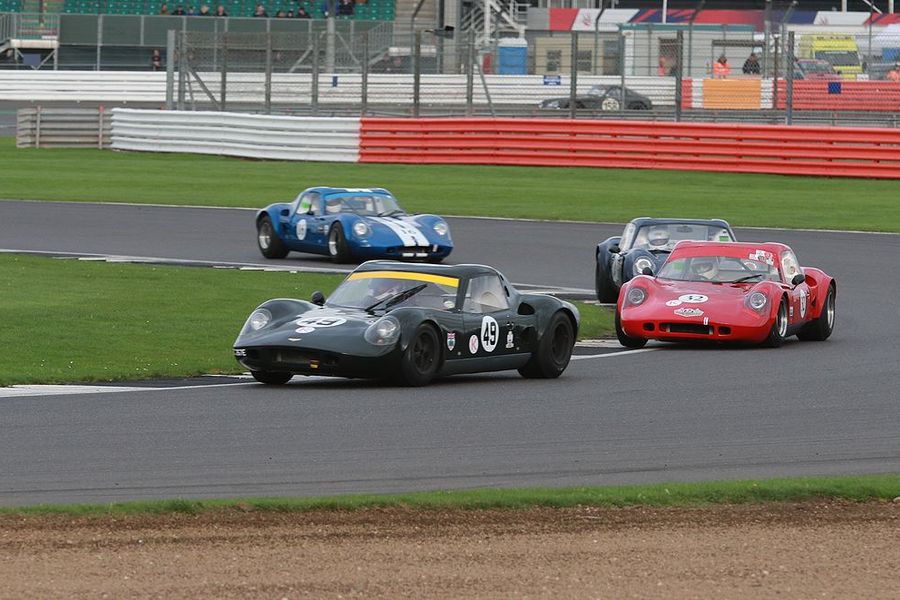 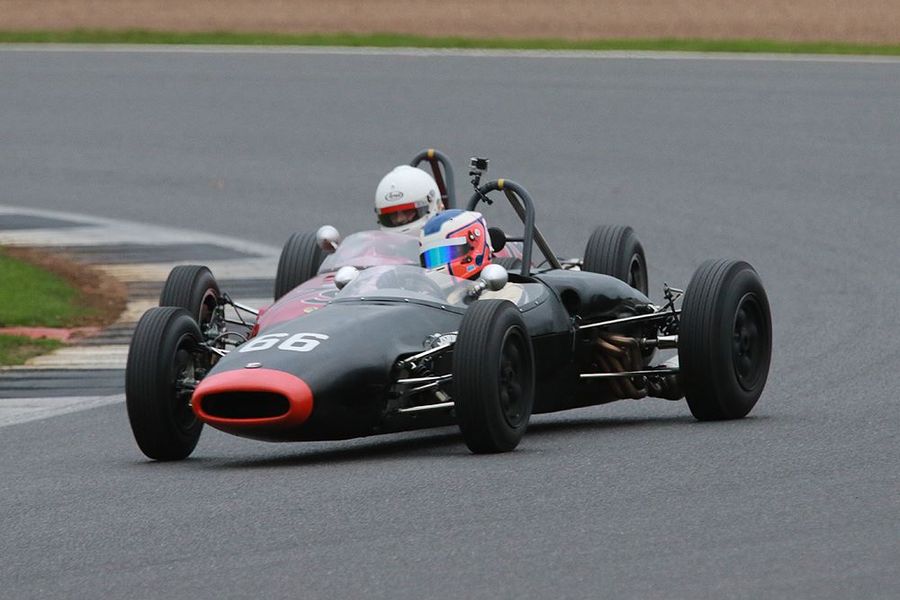 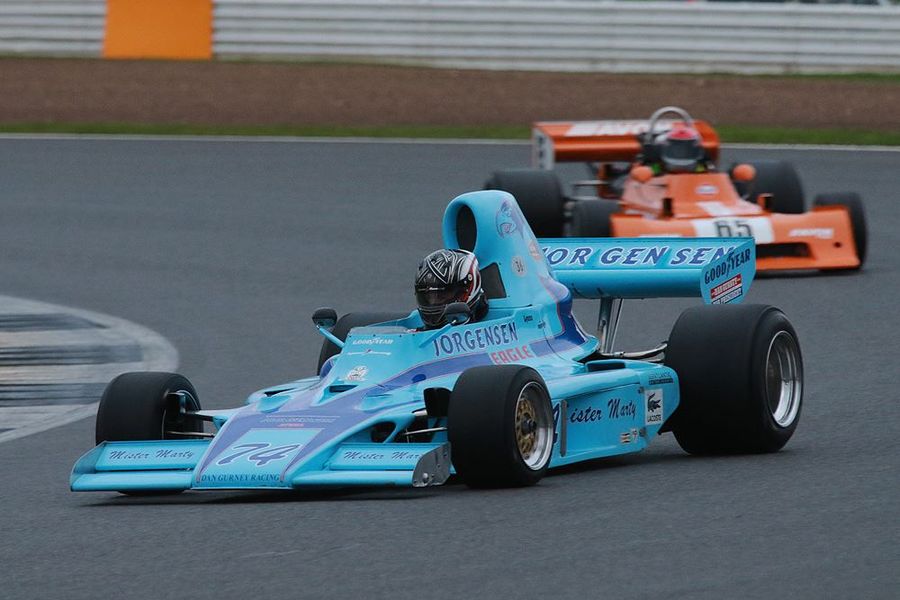 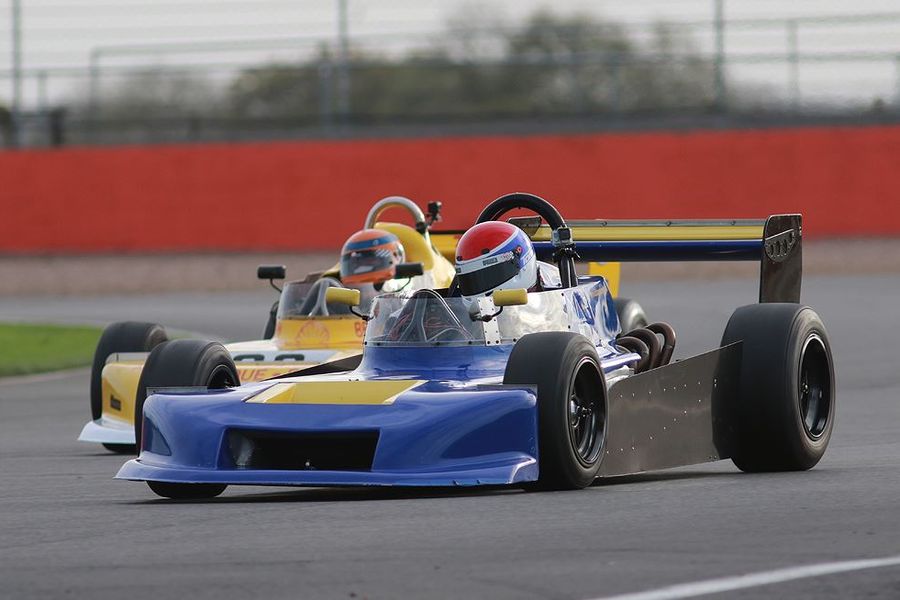 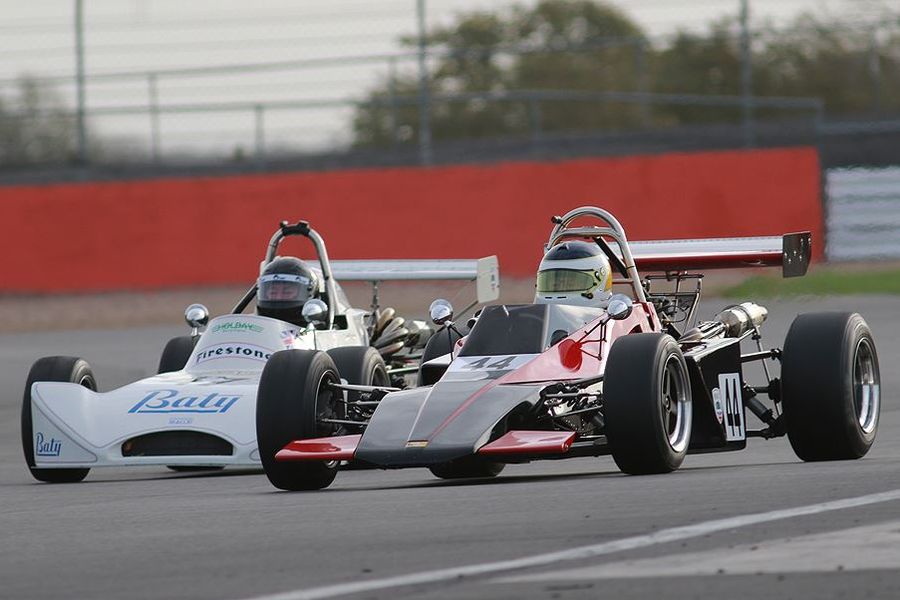 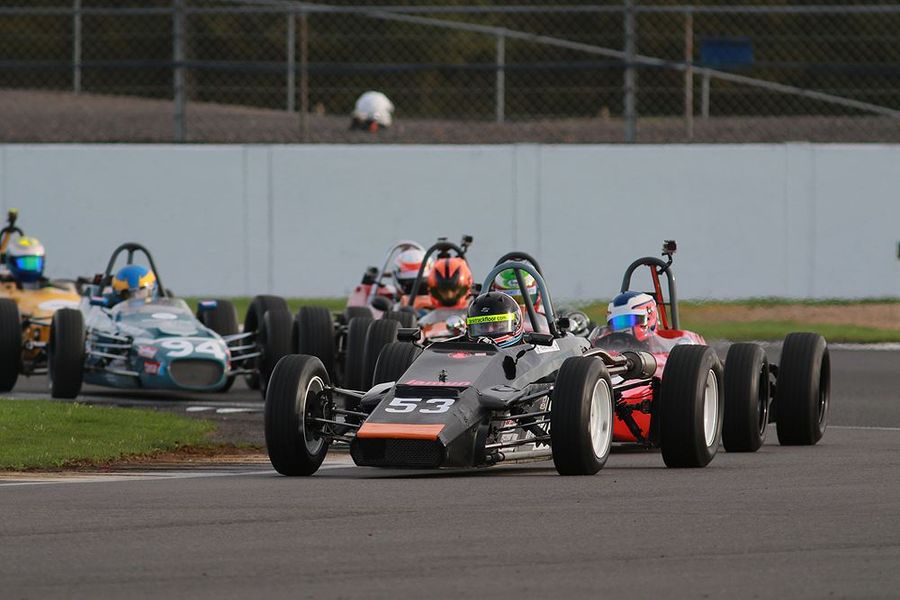 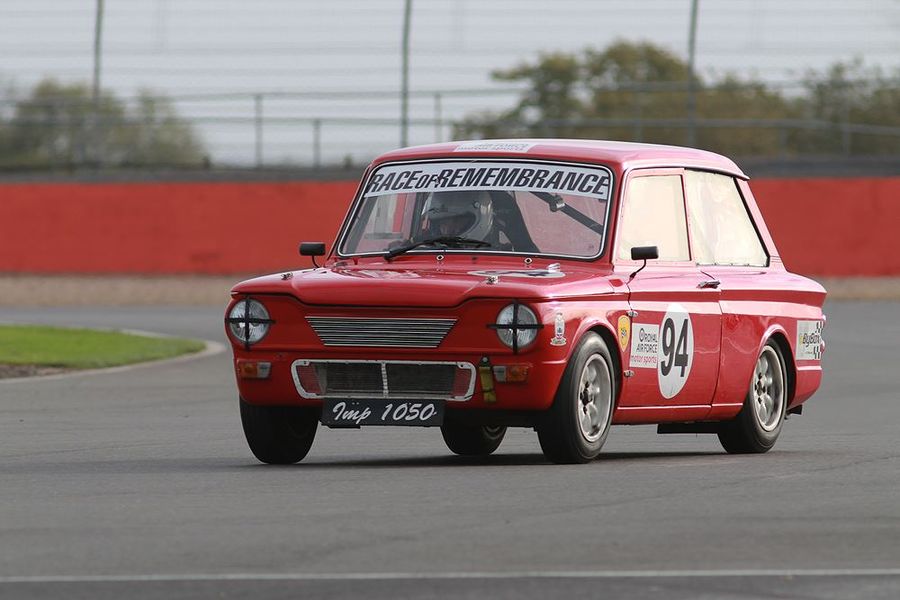 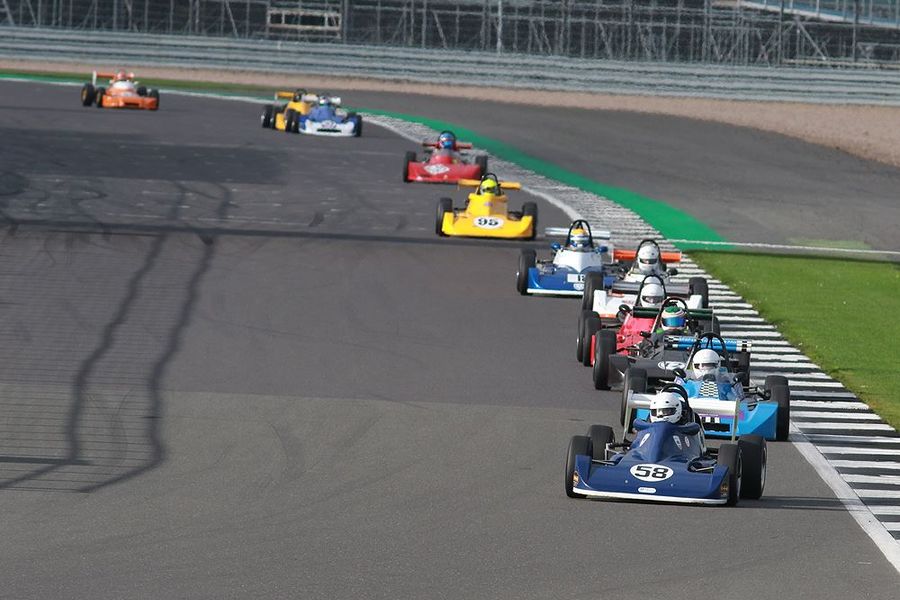 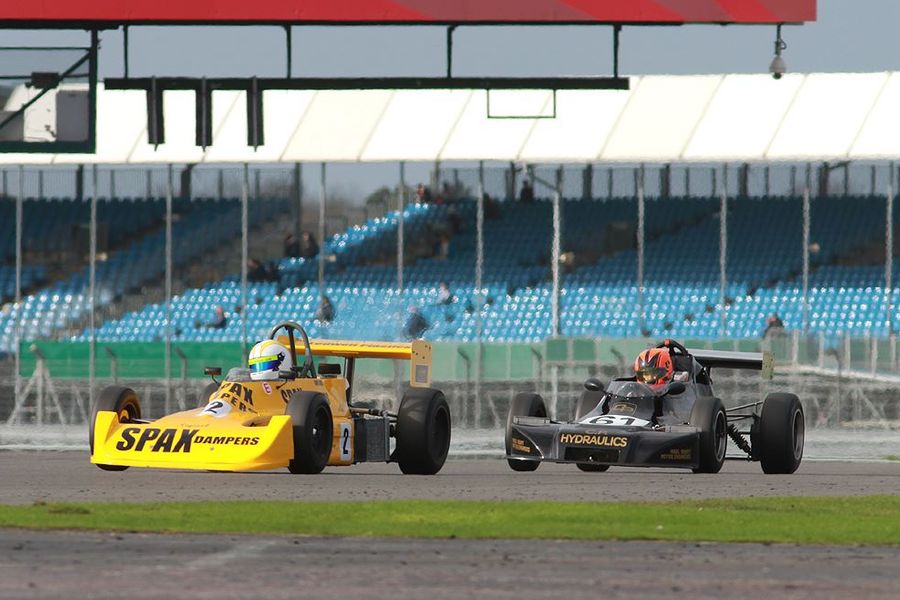 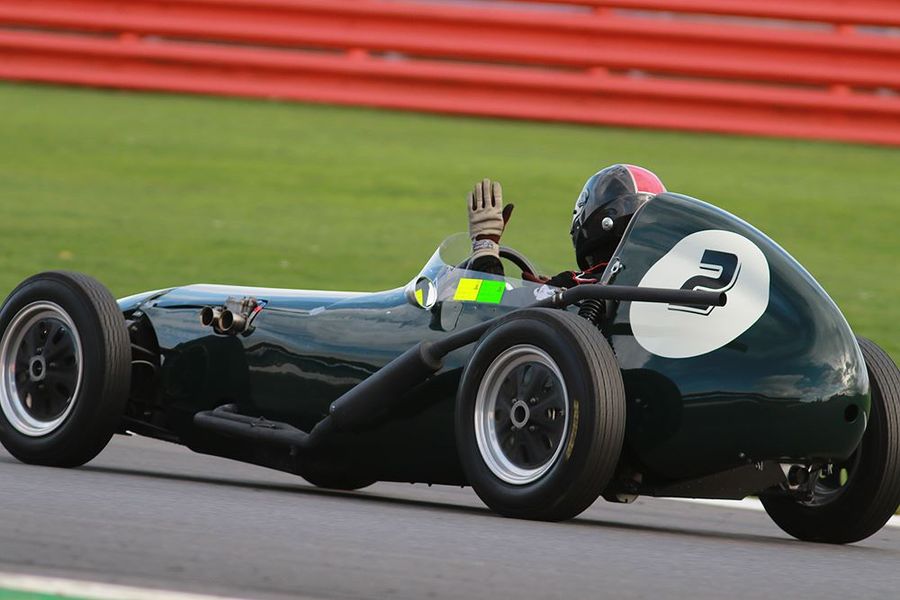 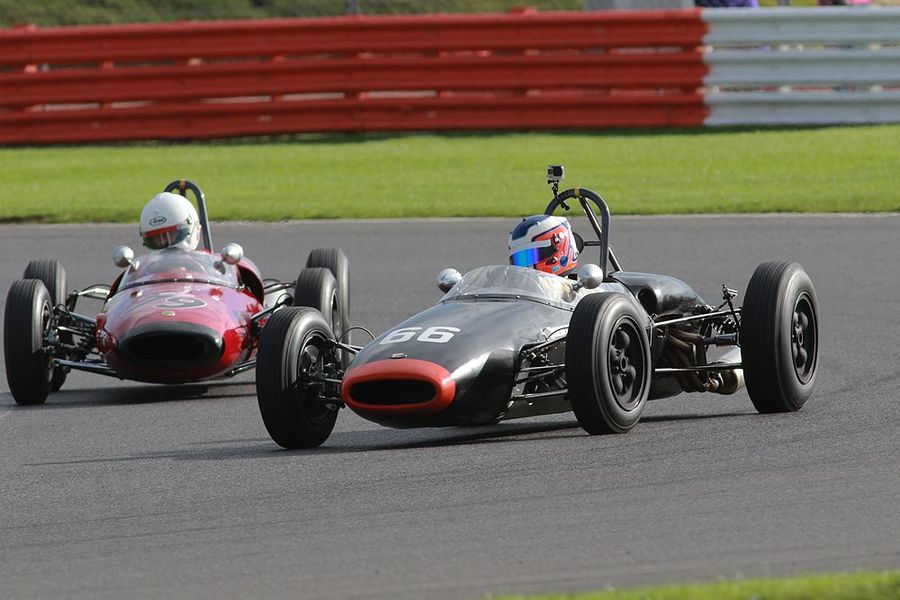 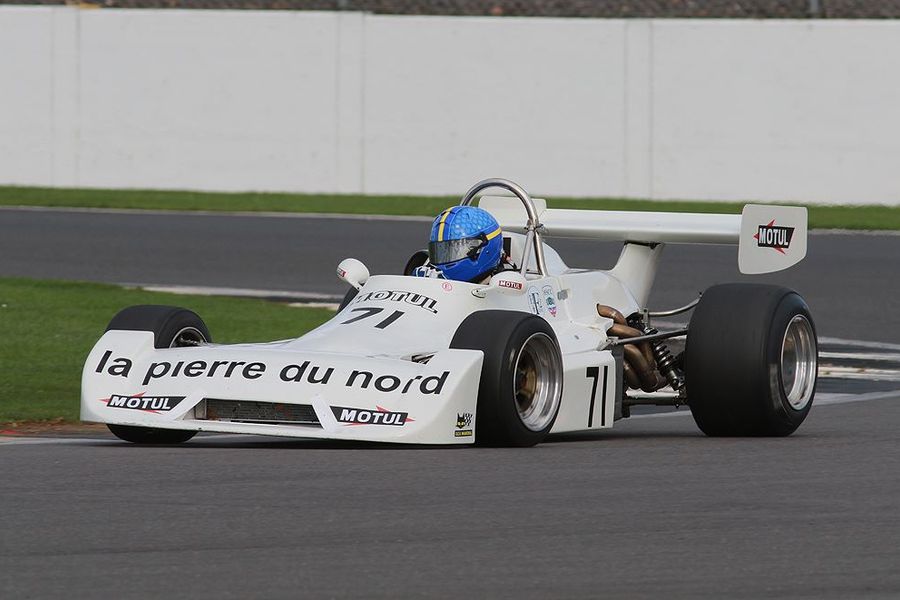 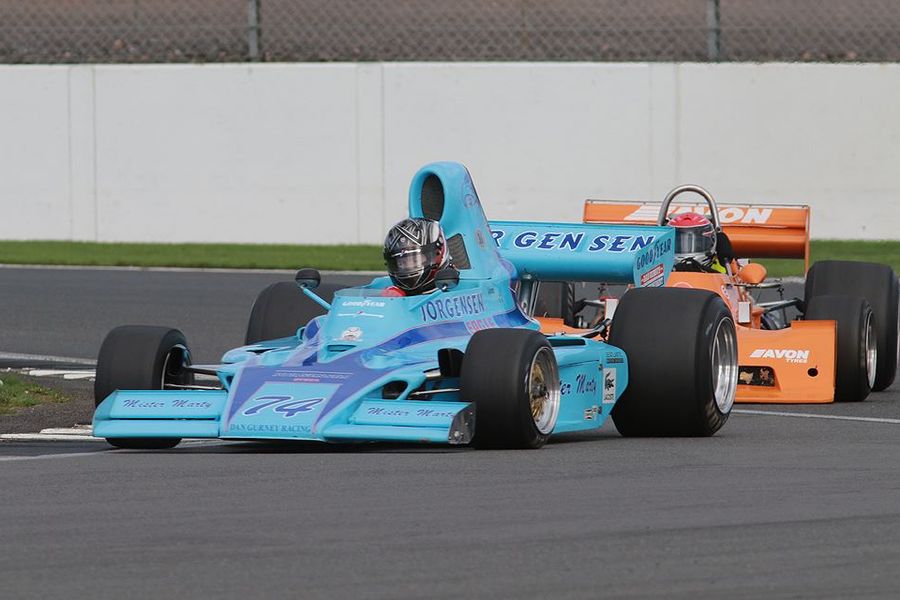 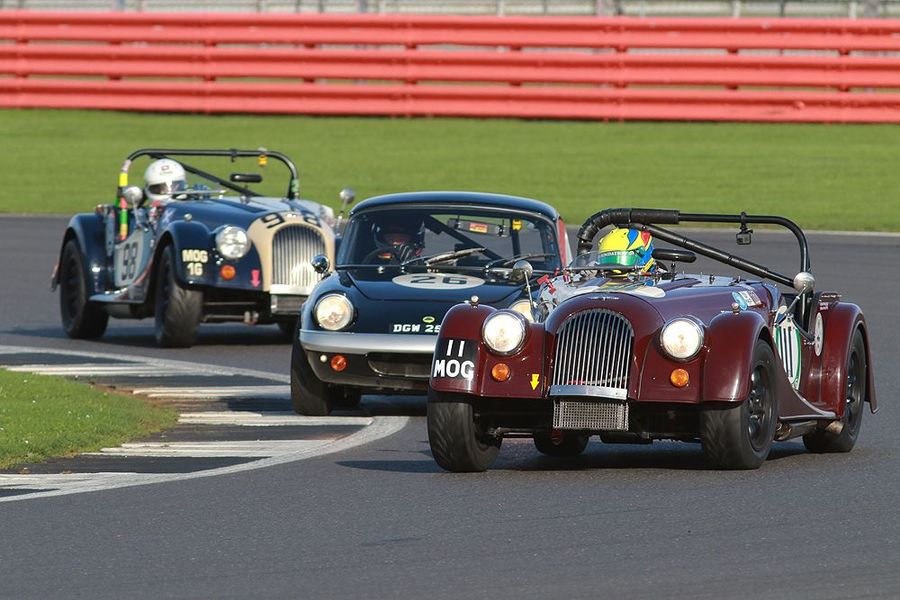 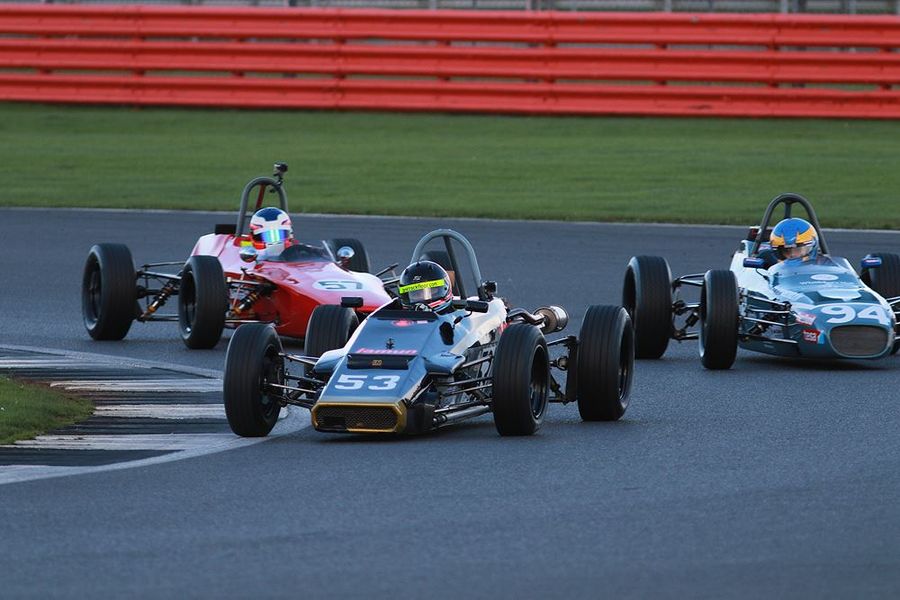 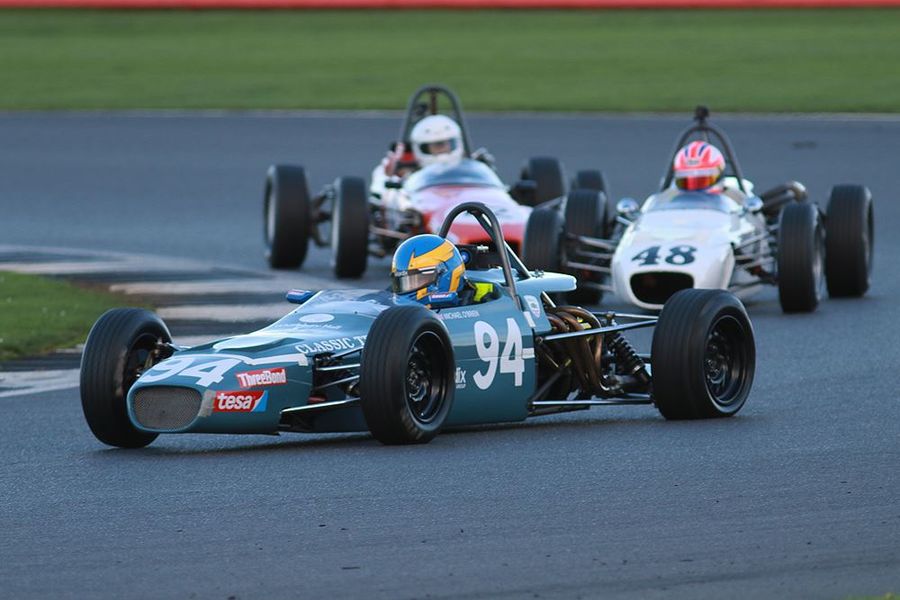 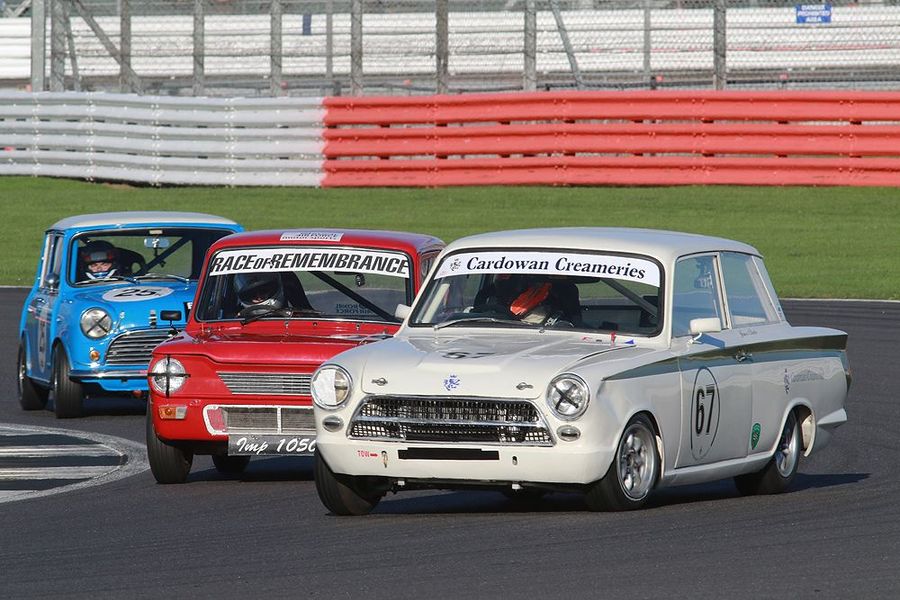 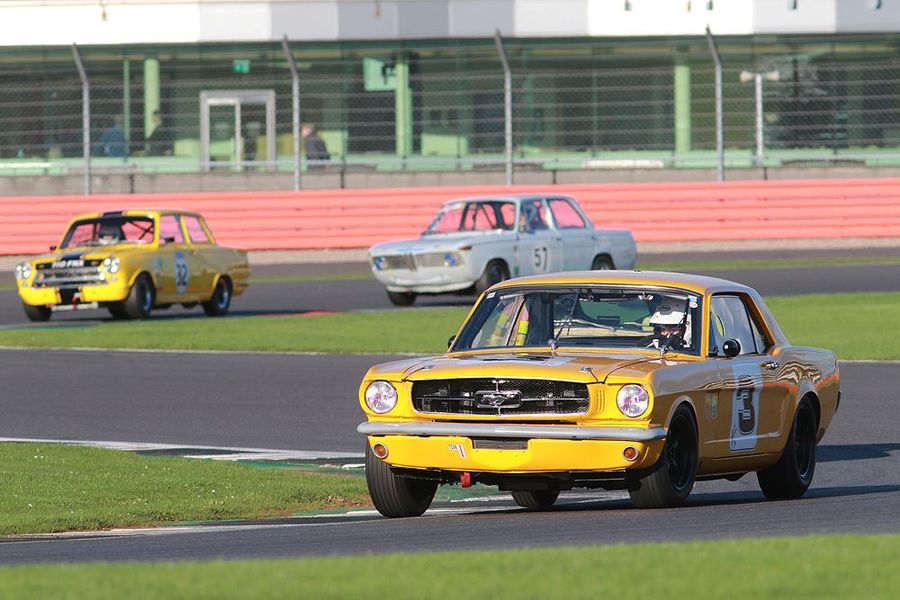 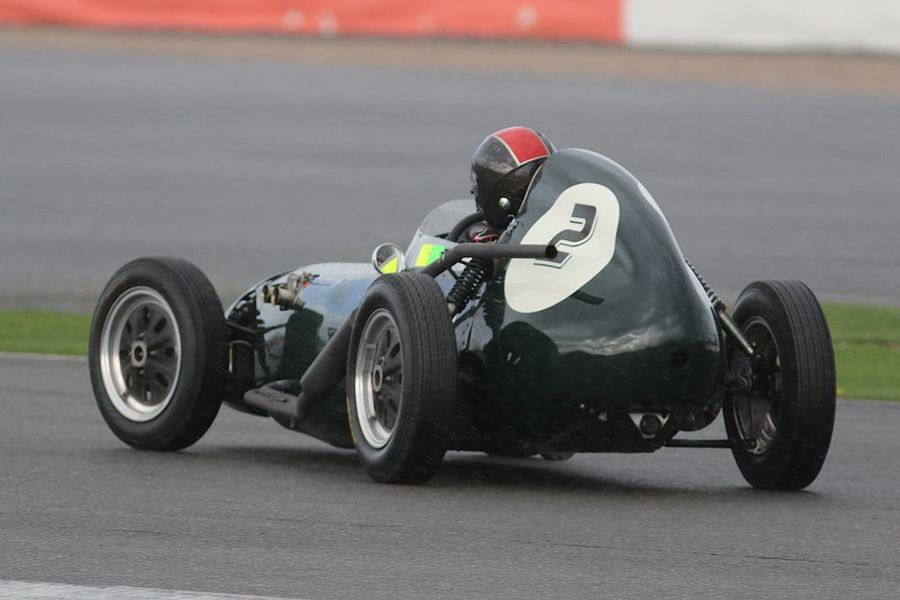 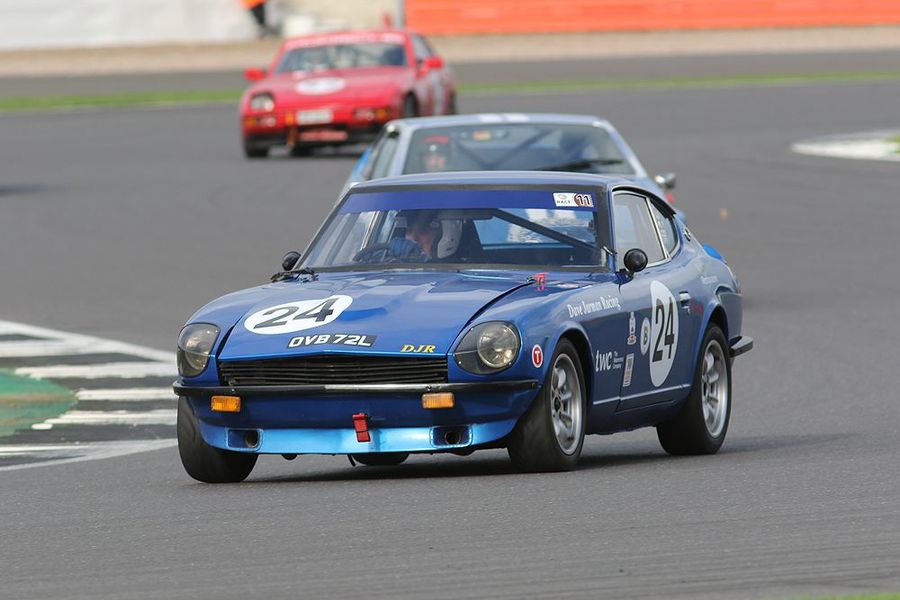 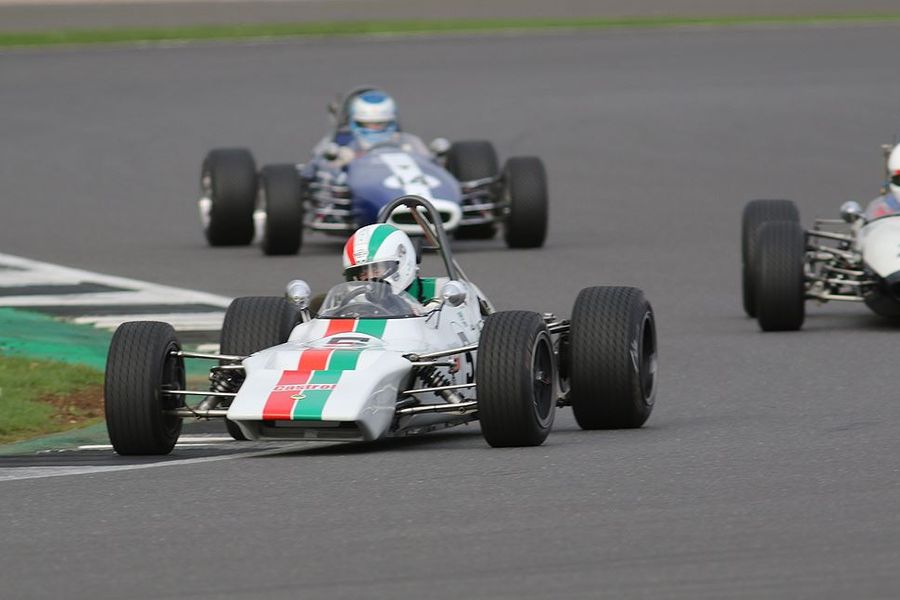 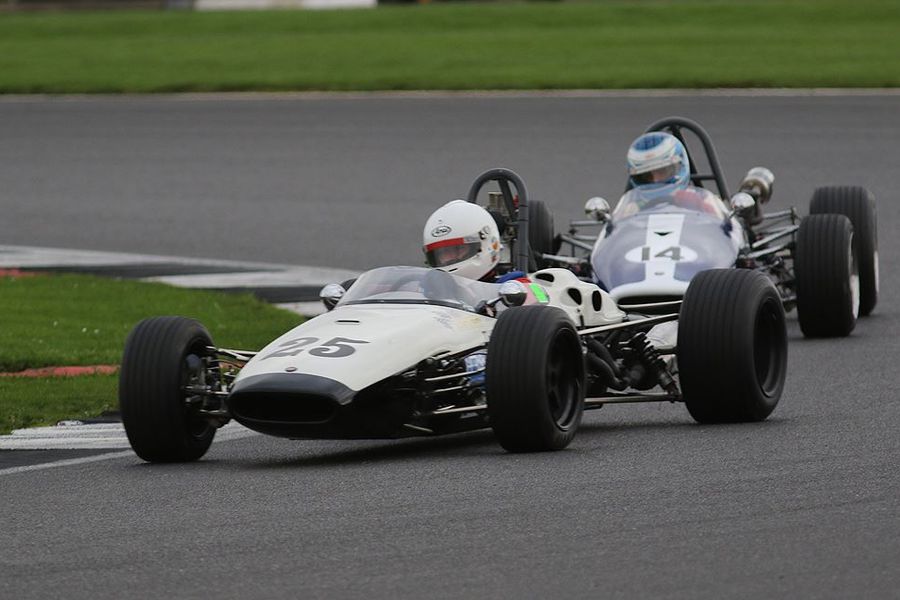 Click on the Gallery tab for pictures from Silverstone courtesy of Paul Lawrence.
Two days of superb racing on the Silverstone National circuit (Saturday/Sunday 21st/22nd October) brought the HSCC’s championship season to a fitting finale as season-long titles were decided.

With a full paddock, 19 races and strong grids throughout, it was a fabulous weekend of racing in an end-of-term atmosphere and the action was at times both dramatic and tense. Most notable was the HSCC Historic Formula Ford 1600 Championship where three drivers decided a season-long title race that has consistently delivered sensational racing.

O’Brien drove a fine race to win the opener after a touch of wheels with Jackson sent Tarling into a spin at Brooklands. Tarling dropped to sixth place and that left him on the back foot for the second race when only a race win would be enough. However, Tarling drove a mighty race in his Jamun T2 to win the race and seal the title as O’Brien was cruelly sidelined by a rear puncture when looking very strong. Grant took a second and a third to round out his season while Jackson chased Tarling home in the second race after as many as eight cars ran in a fantastic lead battle.

In the Historic Touring Car Championship, Singer Chamois racer Steve Platts took a brace of class wins to seal the title for the first time and continue the impressive championship record for cars from the Hillman Imp range. At the head of the races, Peter Hallford’s Ford Mustang just out-paced the similar car of Alex Thistlethwayte. Richard Belcher and Jonathan Gomm were the best of the rest as fine battles raged all the way down a big field.

The Historic Road Sports Championship concluded with a bumper grid and a compelling race. Unfortunately, the race had to be restarted after a dramatic incident at Becketts involving Barry Davison and Andy Shepherd from which they both emerged unharmed.

Will Plant needed a class maximum to be in the running for a shared title with Peter Shaw but both Plant and John Davison lost time early on. Plant’s Morgan was in neutral when the lights went out and Davison had a spin at Brooklands. Will’s father Richard, in Kevin Kivlochan’s Morgan, set the early pace but did not defend when Will caught up. Davison charged back up to second at the expense of class rival Shaw, leaving it all to a tie-break also involving the Turner of Dick Coffey. The results will be confirmed later today (Monday 23 October).

The final two rounds of the HSCC/FJHRA Silverline Historic Formula Junior Championship featured a three-way battle between Justin Fleming, Peter De La Roche and Benn Tilley. De La Roche had the better results to clinch his first major crown in historic racing at the wheel of his US-built BMC Mk2, while a brace of race wins fell to Cameron Jackson (Brabham BT2) after two fine battles with the Lotus 22 of Andrew Hibberd. Meanwhile, Nick Taylor (Elva 100) won the FJHRA front-engined championship, though the similar car of Mark Woodhouse won both front-engined races.

A truly memorable drive from Michael Lyons, on slicks on a damp track, lit up the gathering gloom on Saturday afternoon as he took a fantastic Derek Bell Trophy victory.

In light rain, Lyons forged the F5000 Eagle FA74 into the lead but then headed for the pits when the gear lever popped out. A temporary fix was made and Lyons stormed back into the race, a lap down on Jamie Brashaw’s March 73A. However, the slippery track played to Lyons’ outstanding car control and, after un-lapping himself, he flew back up to Brashaw and dived ahead on the final lap. On Sunday Lyons repeated the result but the hard-charging Brashaw gave determined pursuit and stayed within five seconds of the flying Eagle.

Andrew Hibberd claimed victory in the Historic Formula 3 finale after a wheel-to-wheel contest with newly-crowned champion Jon Milicevic. They were side-by-side on the final rush to the flag where Hibberd got the verdict by just seven-hundredths of a second after a typically sporting battle. Ahead of them in the concurrent Historic Formula Libre race was Mark Goodyear in his Lotus 59.

Alan Cook scored a late Classic Clubmans win when Mark Charteris went out with diff failure and John Harrison had a late spin that bent his rear wing. Meanwhile, Charles Barter signed off his title season with a resounding 70s Road Sports victory over a bumper field. His task was eased a little when son Julian retired his Lotus Europa on the warming-up lap. Father and son Michael and Will Schryver emerged best of the Chevron pack in the Guards Trophy race, although Simon Hadfield made the early laps by keeping his Elva Mk7S ahead of the B6 and B8 brigade.